Unfortunately, at 8 o’clock the next morning, the swarm took off for parts unknown, ignoring the bait box. Bees generally have new hive locations scouted out several days before swarming, and these bees had already decided they were going to set up a new hive … The swarm lands at the neighbor's house.

… at my next-door neighbor’s house! My neighbor noticed them late that afternoon. The swarm landed under the bay window.

The swarm is centered on an empty electrical outlet box under a bay window. At this point, the bees are remarkably docile and can be collected fairly easily, but once the queen enters the wall it will be very difficult to remove the swarm (then technically a new hive) intact.  I scoop them into a large cardboard box and close the lid.  My plan is to transfer them to an empty hive stocked with a few of the frames we used in the bait box. A new hive for the swarm. 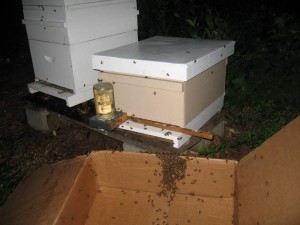 The swarm after installation into the new hive.

Most of the swarm is in the new hive at this point, with a small opening left to allow the stragglers to enter. By the next morning (6 am), most all the bees were in the hive … Only a few dead bees remain after the swarm departed the new hive.

… only to fly off an hour later (shown here is the inside of the hive, with only a few dead bees remaining). I wish I had closed up the entrance completely when I first checked them that morning. We hoped they would fly back to my neighbor if the queen had remained ensconced within the wall, but they didn’t return.

Why did this hive swarm? Swarming is the mechanism for propagation of bees in the wild, but it generally does not occur until the second season of a hive’s existence.  In this case, I had continued to feed the hive syrup, building up the population dramatically, and I had been slow to install additional boxes to store honey, which crowded them.  The recent bout of hot weather was probably the final trigger for the bees to leave.  Here is a photo the hive just after dark about one week before the swarming. Excessive bearding one week before the swarm is emitted.

This “bearding” phenomenon is said to be common in hot weather, but it is also a sign of a crowded hive.  The queen cells (also called “swarm cells”) were already being constructed, and swarming was probably inevitable by this point.